In part 1 and part 2 we introduced the concept of denormalization, materialized views and background tasks in order to emulate JOINs in the to-one direction on NoSQL databases. Now we'll talk about all remaining little but important snippets of the puzzle left over and discuss how to ensure that this method works in real world situation like server crashes.

When to start background tasks?

Given this we have to answer when to start background tasks while keeping in mind that the connection / database / web server can fail for many reasons. A straightforward way is to start background tasks right after having saved changes to photos or users (via Django's post_save signal for example). However this solution comes with some problems. Let's take the following evil failing scenario when trying to edit an already existing photo:

In this scenario we succeeded in saving the user's changes to one of his/her photos but we didn't start a background task yet in order to update the corresponding materialized view. A query (like the first one from section "Materialized views" in our last post) using this materialized view would fail to find the changed photo because it doesn't contain up-do-date denormalized properties of its corresponding photo. 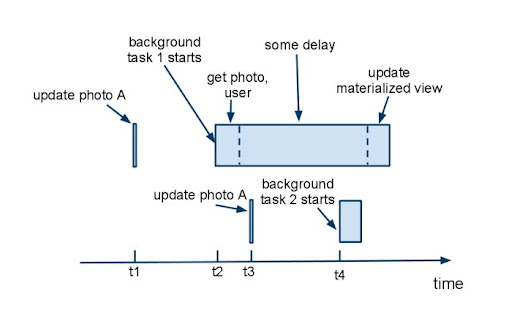 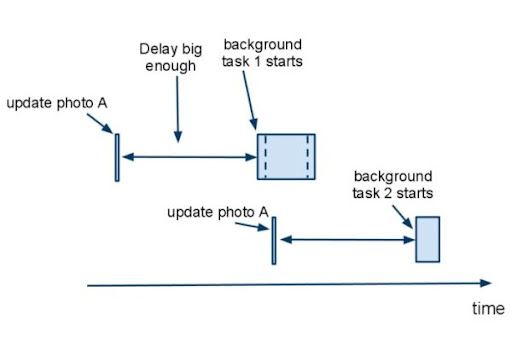 Multiple updates to photos almost at the same time don't represent any problem for updates of materialized views because they'll start in delayed background tasks i.e. they will get the latest version of the photo out of the database in order to update the corresponding materialized view.

How to update materialized views

As a result we have an incorrectly updated materialized view because the background task 2 fetched the data before background task 1 saved its updates. To avoid this we always have to completely rebuild the affected entities of the materialized view. Even if only the photo's title changes we have to update the denormalized_gender too! I.e., we have to get the corresponding photo and the user! This ensures correct updates even if overwrites happen because each update rebuilds the affected entities completely i.e. the materialized view is kept up-to-date with the latest data.

Best of both worlds 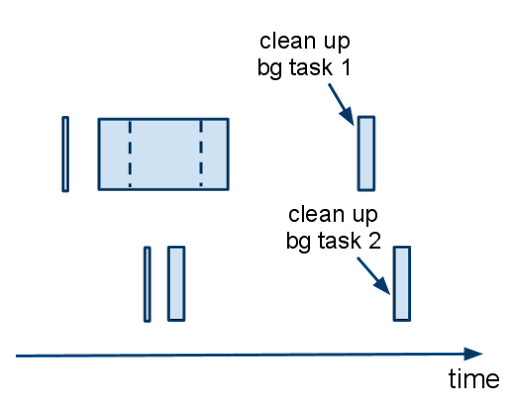 The cleanup background tasks will fetch the latest photo and user info so that the materialized view will contain correctly denormalized properties afterwards even if the first background tasks got into update-conflicts.

Summarized, the following should be done:

In the last three posts (including this one) we described one possible method to handle JOINs for the to-one side on non-relational databases. Let's summarize the most important points:

This method can be implemented on App Engine and MongoDB (in combination with celery for example) as well as on other NoSQL databases.

It becomes clear that using JOINs in the to-one direction on non-relational databases is a mess to deal with. From the view point of a developer, it's far from optimal for the following reasons:

So is there a better solution than setting up the whole process by hand each time we need JOINs? We believe that there is a much more elegant way to do so. Our answer is django-dbindexer, which will use the method described in this blog post series so you can use JOINs without having to rethink your queries or to add denormalized fields to your models manually! Just tell django-dbindexer which JOINS you want to use and the indexer will take care of everything else. Stay tuned!