In part 1 of this series we've seen how to use Python/pyjs with django-mediagenerator. In this part we'll build a ridiculously simple HTML5 canvas drawing app in Python which can run on the iPad, iPhone, and a desktop browser.

Why ridiculously simple? There are a few details you have to keep in mind when writing such an app and I don't want these details to be buried under lots of unrelated code. So, in the end you will be able to draw on a full-screen canvas, but you won't be able to select a different pen color or an eraser tool, for example. These extras are easy to add even for a newbie, so feel free to download the code and make it prettier. It's a nice exercise.

With a desktop browser we could start hacking right away, but since we also support mobile browsers we need to fix something, first: One problem you face with mobile browsers is that the actual screen size is not necessarily the same as the reported screen size. In order to work with the real values we have to reset the viewport in the <head> section of our template:

Now the reported and actual screen size will be the same.

Before we look at mouse-based drawing we first implement touch-based drawing because that has a greater influence on our design. We'll implement a simple widget called CanvasDraw which takes care of adding the canvas element to the DOM and handling the drawing process:

The last two lines configure the way lines are drawn. We draw lines instead of individual points because when tracking the mouse/finger the individual positions are too far apart and thus need to be connected with lines.

In case you've wondered: The lineCap property can be butt, round, or square: 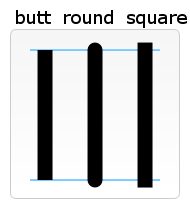 The lineJoin property can be round, bevel, or miter: 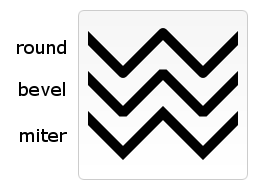 (Note: both images are modifications of images used in a Mozilla tutorial.)

Next, let's add the event handlers and the mouse/finger tracking code. The problem here is that we can't receive any touch movement events while we're drawing something on the canvas. The touch events get lost in this case and the user will experience noticeably slower drawing and bad drawing precision in general. The solution to this problem is to record the touch events in an array and then draw the the lines asynchronously via a timer which gets executed every ca. 25ms and to limit the drawing process to ca. 10ms per timer event. You can fine-tune these numbers, but they worked well enough for us. CanvasDraw stores the mouse/finger positions in self.path. Here's the rest of the initialization code:

So far so good. The actual mouse/finger movement paths are represented as a list. The path is ordered such that old entries are at the end and new entries are added to the beginning of the list. When the touch event ends we terminate the path by adding None to the list, so multiple paths are separated by None. Here's an example of what self.path could look like (read from right to left):

OK, let's have a look at the actual touch tracking code. We use only one method for both touchstart and touchmove events because they do exactly the same thing:

Now we can implement the actual asynchronous drawing process. Remember, we use a timer to periodically (every 25ms) draw the mouse/finger path in self.path. We also limit the drawing process to 10ms per timer event. This is our timer:

First we have to call beginPath() to start a set of drawing instructions, then we tell the context which lines to draw, and in the end we draw everything with stroke(). The paths are processed in the while loop by getting the oldest (last) two points from the path and connecting them with a line. When we reach the path terminator (None) we pop() it and continue with the next path.

Finally, we have to instantiate the widget and also prevent scrolling on the rest of our page:

We need a minimum amount of CSS code. Of course, Sass would be nicer and the media generator supports it, but then you'd also have to install Ruby and Sass which makes things unnecessarily complicated for this simple CSS snippet in reset.css:

The first part just resets margins, so we can fill the whole screen. The last part disables text selection on the iPad and iPhone and also turns off pop-ups like the one that appears when you hold your finger on a link. That's fine for normal websites, but we normally don't want that behavior in a web app.

Of course we also need to add the file to a bundle in settings.py

and the bundle must be added to the template:

What about mouse input?

Now that the infrastructure is in place the mouse tracking code is pretty straightforward:

Whew! As you've seen, writing a canvas drawing app with touch support is not difficult, but you need to keep more things in mind than with a mouse-based app. Let's quickly summarize what we've learned: